If you are following our blog, you might notice that we start to provide coding solutions at the end of each question. At Gainlo, many people have the feeling that questions asked by Google/Facebook are much easier than they expected, but they still didn’t make it. The most common reason is that they failed to provide solid code in a short time.

The surprising truth is that 90% of questions asked in interviews are basic, but the expectation is high – candidates should be able to write bug-free code quickly. And this is exactly what our blog posts are focused on.

In this post, we’re going to talk about how to analysis this popular question and more importantly, tips and tricks on writing bug-free code.

Given a string, find the longest substring without repeating characters.

For example, for string “abccdefgh”, the longest substring is “cdefgh”.

This question has been asked by Facebook recently. In addition, the question is not too hard to solve, but providing solid code in a short time requires some work. And this is the most common type of question in interviews.

As you may already know, it’s recommended to come up with the simplest solution first and then you can keep optimizing. Obviously, we can go over all the substrings and find the longest one without repeating characters. This will give us O(N^4) time complexity (O(N^2) to get all substrings, O(N^2) to check if each substring has dups) and O(1) space complexity. Although it’s clear that the solution is too slow, we should still mention that to the interviewer.

Despite the fact that the solution is naive, it makes us clear that the next step is to make it faster. And the most common approach to speeding up your program is to use more memory. In other words, we can sacrifice the space complexity to improve the time complexity.

If you are able to think in this way, things become much clearer. A hashset is the most common data structure to detect dups and with a hashset, we can check if a substring has dups in O(N) time.

Now, the bottleneck is at iterating over all substrings, which has O(N^2) complexity. How can we make it faster?

In fact, there are lots of unnecessary checks. If we already know a substring S has duplicate characters, there’s no need to check any substring that contains S. If you have read our previous post – If a String Contains an Anagram of Another String, you should realize how similar these two questions are.

Take string “abccdefgh” as an example. When we realize that substring “abcc” has dups, we can immediately abandon the whole substring and check substrings from “cdefgh”. Thus, we have the following approach:

In essence, as we know processing all substrings are unnecessary, sliding window can be a great technique to improve that and the same technique has been used in many problems like Subarray With Given Sum.

If you haven’t tried to write the code please do so. Once you finished, try the following three test cases: 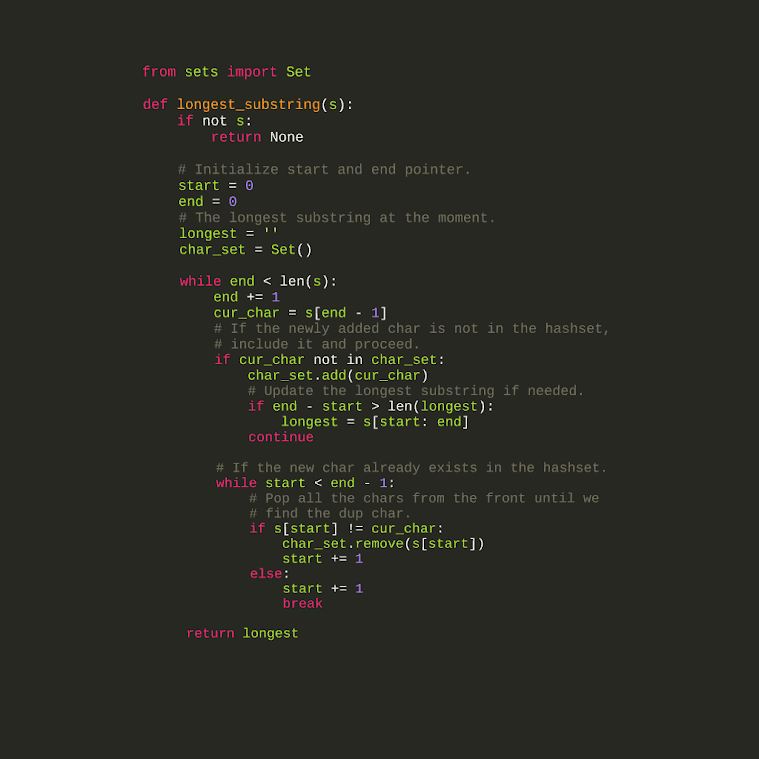 If you write the code to solve it, you may notice that it’s not easy to make it bug-free easily. You may need to address several edge cases to make it work. That’s exactly the point of this question. Many people are able to come up with the solution, but very few of them can write the perfect solution, especially with a time constraint.

I hope the biggest takeaway from the post is to care more about the coding part if you are used to solving problem in your mind. Most of the interview questions are not too hard to think, but very few people can get the code right. That’s why most people found the question simpler than expected but still failed in the end.